I was walking down a street in Chikamagalur near Bangalore during a vacation when I saw a bunch of white button mushrooms peeking at me from within the greenery along the roadside. This was not the first time I saw mushrooms in their natural habitat but certainly a memorable occasion simply because of the startling contrast between them and the color of the grass around them. It was almost as if the bushes had eyes. They were some beautiful, fresh, brightly colored white button mushrooms. There began my fascination to know more about this gorgeous and nutritious fungus.

Chaga mushrooms(Inonotus obliquus), in particular, are often confused with Tree Burls. But though they may look a lot alike, a closer look can help you identify it. If eyes lack the experience, then it's better to go by the book and ask yourself these questions:

Chaga mushrooms start growing from the inside of the Birch trees in Deciduous forests of Siberia, North-America, Europe, and Asia. Eventually, they erupt out of the tree after many years. They take as much as five to seven years to reach maturity before they can be harvested. They look black in color and have cracks on them. Here is a picture of a birch tree burl: Not to confuse with a tree burl, this mushroom is black in color. The tree burl takes the color of its tree bark while the mushroom is a bit darker than the tree and is typically black. Though they are distinctly dark in color, they do have a resemblance to the tree burl or bark in case it is a burnt bark. It is important to note that the Chaga mushrooms crumble easily.

Chaga Mushrooms’ brilliant orange golden interior is a clear standout if you break a little tip of the mushroom and take a look. This color is almost a fresh ginger-like color which makes the characteristic soft inside of the mushroom very tasty. Sometimes an evident white vein is visible through the mushroom when the growth is longer. A Chaga can grow up to 3 feet long out the tree. Keep in mind not to dig into the tree brutally with a knife, to get a look at the inside. This is a highly criticized way to harvest or explore a Chaga. 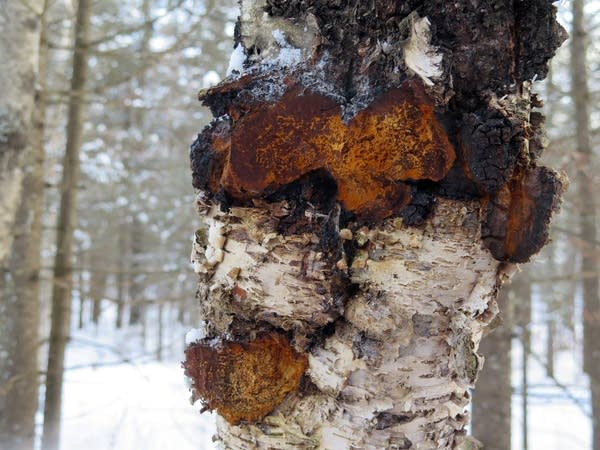 Tree burls being an extension of the tree, usually have a little-rounded edge on it. This fungi though tends to take a conical cork-like shape while erupting out of the tree that it grew in.

Characteristic of the mushroom family is usually a sponge-like softness. Chaga being porous, does not retain any water in it. This makes it brittle as well. When one feels it, one is immediately reminded of a sponge especially because of the combination of small and large pores. If nothing else works, just look for the gold. The golden interior of this mushroom differentiates it from it's closest resembling mushroom "black tree knot fungus" or "Meshima" even.

I hope this gives you an insight into the identification of our beloved Chaga mushroom. Share your explorations of mushrooms with us as well.

Did you know that Chaga Mushroom Powder can help boost energy and at the same time give you cleaner teeth? Should you take Alkaline foods every day?

The answer is not as simple as you might think.  Let's start by understanding what are Alkaline foods.  Alkaline fo...
Read More A Battle of Spirulina vs Chlorella as Chlorophyll Supplements

Should you take Alkaline foods every day?